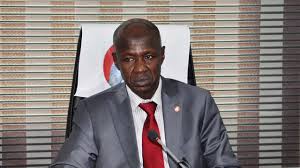 Some ‘Yahoo Boys’ had unleashed an attack dog on some EFCC officers in Ibadan when the officers stormed the hideout of the suspects at Agara area of Ibadan.

The ploy, however, failed as the officers were able to dislodge the dangerous dog and gained entry into the apartment to effect the arrest of the suspects.

As if that was not enough, one of the suspects smashed his android phone, with the intention to destroy it, in order to conceal evidence, which also failed as the officers got hold of the phone.
The phone is currently with the forensic unit of the commission for analysis.

The suspects had posed online as white ladies and foreign military officers to defraud unsuspecting victims, using the internet.

They will be charged to court as soon as investigations are completed.