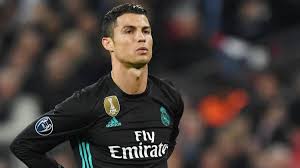 Juventus striker, Cristiano Ronaldo led Portugal to victory against the Netherlands on Sunday to win the maiden UEFA Nations League trophy with a lone goal.

Following the victory, his partner, Georgina Rodriguez, shared a lovely photo on Instagram of herself with the Juventus striker, sharing a kiss as they pose with the trophy.

See the photo below-