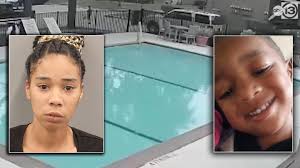 A 26-year-old Texas woman, Lexus Stagg has been arrested and charged with Criminally Negligent Homicide for running over her 3-year-old son with her SUV, while playing a game of “Chicken” with her kids.

The incidence which took place on June 11, had surveillance footage from her Harris County, Texas apartment, which showed her driving towards her three children as they ran towards the front of her 2006 Lincoln Navigator, according to a news released from Harris County District Attorney, Kim Ogg.

Two of her children moved out of the vehicle’s path on time, but her 3-year-old son, Lord Renfro was stuck and Stagg ran over him with the SUV.

She was arrested Thursday and charged with Criminally Negligent Homicide after initially telling police that she thought she ran over a speed bump. Stagg faces up to 10 years in prison if convicted.