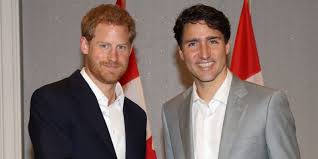 It is been reported that Canada has offered to pay for Prince Harry and Meghan Markle’s round-the-clock security, while the royal couple spend a ‘period of transition’ in the country.

The couple who announced quitting their roles as senior members of the Royal Family last Wednesday disclosed that they will split their time between the U.K. and Canada.

But Justin Trudeau, Canadian Prime Minister has assured the Queen that the safety of the royal couple and their son, Archie will be taken care of, in a decision that could cost Canadian taxpayers millions of pounds.

This decision has been met with mixed reactions as some people were opposed to it. The Director of the Canadian Taxpayers’ Federation, Aaron Wudrick opposed it saying- “I don’t think it’s reasonable to expect us to pay for everything the way we do for a royal visit.”

“If they’re going to make Canada a second home, a good step in the right direction would be to pay for at least part of it, and not rely on taxpayers to fund their entire lifestyle.”